What is Deep Thought?

Deep Thought is a Sinatra-based app with a big brain. And by "big brain," I mean quite big - some may describe it as a "brain the size of a planet," though Deep Thought prefers not dabble in such hyperboles. What does Deep Thought do with this huge brain? It manages your deploys.

Deployment workflows are often overly complicated, multi-stepped labyrinths of servers, keys, and scripts, held together with a few scraps of documentation and a bit of luck. Shipping is not unlike closing your eyes and slamming the Infinite Improbability Drive button, though perhaps with less falling whales (unless you're Twitter).

Deep Thought works to open up the deploy process and make it simple and straight-forward. Deep Thought allows you to deploy from anywhere to anywhere, and, in turn, encourages devs to be excited about shipping, rather than reluctant.

Deep Thought was inspired by GitHub's own Hubot+Heaven workflow. Check out Zach Holman's talk to see the original inspiration.

Why should I use it?

How do I get started?

The easiest way to get started is to clone this Gist:

Deep Thought is largely designed to be deployed to Heroku, though it will work just as well on a custom server or VM. At the very least, Deep Thought will need an environment with Ruby and Git installed and access to a PostgreSQL database.

For details on how to get up and running, head over to Deep Thought's repo and have a read-through the README.

How does Deep Thought work?

Deep Thought wraps around your chosen deploy method/framework, and abstracts the act of deployment into a simple and easy-to-access process.

These elements combine to create a deployment DSL for Deep Thought, which is something like this:

There are two main ways of interacting with Deep Thought - via the web interface and via the API.

Deep Thought's web interface is a front-end that lets you manage and deploy through the browser. It is responsively designed and mobile-ready. To access it, simply hit the root url or IP your Deep Thought is hosted at.

You'll have to authenticate yourself via email/password before having access to any part of Deep Thought. Once logged in, you will be able to setup new projects, add users, manage your account, and, of course, deploy projects. 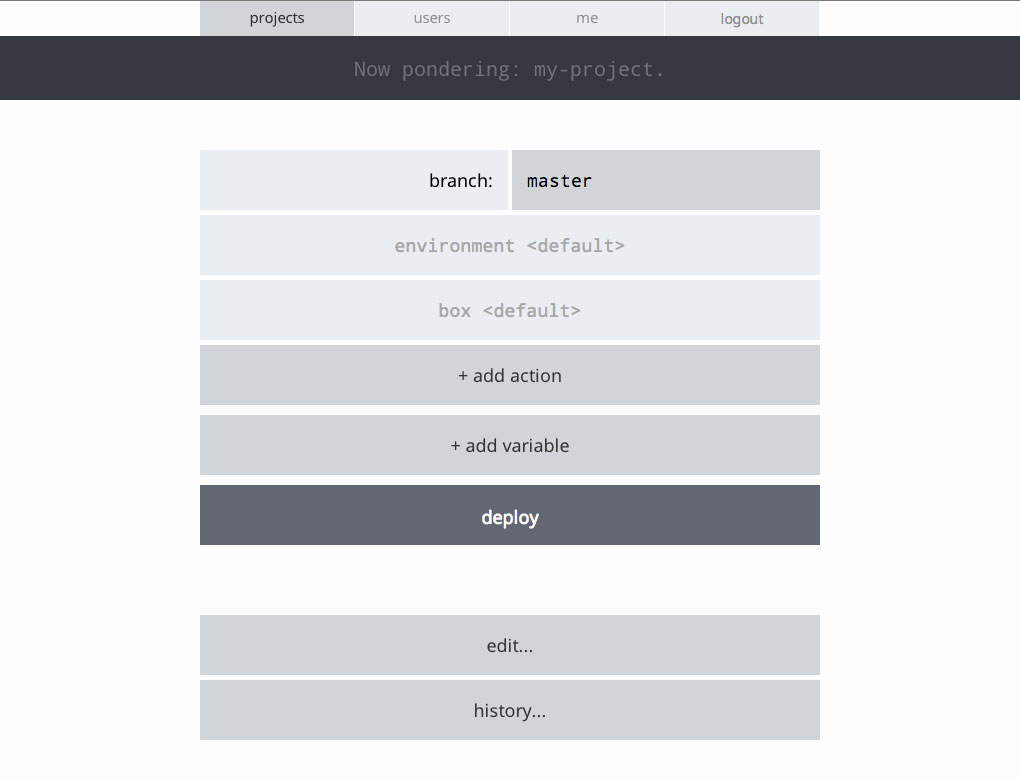 In addition to kicking off deployments, you can also see a project's deployment history to check on previous deployments and see if they were successful or not.

Deep Thought's API is useful for attaching and/or building interfaces to interact with Deep Thought. One of the more common (and awesome) uses for the API is to enable Hubot to talk to Deep Thought.

Once Hubot can communicate with Deep Thought, you can conveniently initiate deploys straight from your chat room, like so:

Even better, Deep Thought includes support to, upon deployment completion, send a notification to a specified URL, so Hubot can also let you know if your deploy was successful or not.

Hubot integration is ready to go - just use this Deep Thought Hubot script.

What deployers are available? What CI service integrations?

Deep Thought has a shell script deployer already built in - the shell deployer will execute a specified shell script in the project and pass it the actions, branch, environment, box, and variables via arguments.

As far as CI service integrations, Deep Thought comes with Janky integration built in. To enable it, several env vars must be set:

But I don't deploy with X or test with Y!

No problem - write some plugins!

You can read more about writing your own deployers and ci service integrations in the Deep Thought README.

If you do write a new badass deployer or cool CI service integration, be sure to add it to the wiki pages so the Deep Thought community can benefit from your awesome work!

I'm still not convinced. Can I look at the source code?

Sure. Knock yourself out:

Find an issue? Report it! Have a fix? Open a pull request!